2018 looks to turn the Golden State into the greenest territory on the west coast. After the legalization of marijuana – thanks to Prop 64, adult Californians will be able to buy, grow and sell pot recreationally. This game changer will have a dramatic affect on the states economy; and the numbers look very promising. It’s projected by 2026, the marijuana market could be worth a whooping $50 Billion – nationally.

On Tuesday, August 8, 2017 at 10P ET/PT, The Profit’s Marcus Lemonis will take you on a journey where he finds the profit in marijuana. In the meantime, see for yourself how much the market will explode by exploring the numbers behind marijuana.

MARIJUANA MILLIONS: BY THE NUMBERS

Starting January 1, 2018, they’ll be able to buy it in licensed pot shops.

Thanks to prop 64, California’s marijuana market is expected to more than triple in value by 2026, up to a whopping $6 billion.

While California’s market will be the world’s largest…. 3 the national market – if fully realized — could be worth more than eight times much — $50 billion — the equivalent of the American craft beer and chocolate markets combined.5

Thanks to prop 64, California’s marijuana market is expected to more than triple in value by 2020, up to a whopping $6 billion.

Another consequence of legalization — as many as 6,000 prisoners serving marijuana-related sentences could walk free early.8

Growers will be required to tag every plant under a state “track and trace” program, the largest of its kind in the world.9

The state also plans to standardize packaging, place limits on advertisements, and require all marijuana to be sold in childproof containers.10

Every day roughly 7,000 Americans try weed for the first time, and 60% of the country supports full legalization.11 12 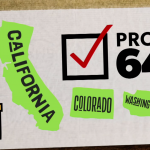