5 Ways To Get High In Las Vegas

Nov 15-17 brings the annual Marijuana Business Conference to Las Vegas. The huge cannabis industry convention is expected to draw 14,000 guests from all over the world. In advance of MJBizCon—and in celebration of Nevada’s freshly legal recreational cannabis market—Leafly presents a four-part series for cannabis fans ready to make the most of their time in town.

We now live in a world where you can visit the singular city of Las Vegas, Nevada, with all its glamour and gambling and world-class sensory delights, and in between the buffets and thrill rides and high-tech shows by pop superstars, you can stop by a store to purchase legal, sensory enhancing cannabis.

Cannabis may only be legally purchased by those 21 and up, who must show government-issued ID.

This pinch-me reality comes with clear boundaries. Cannabis may only be legally purchased by those 21 and up, who must show government-issued ID to enter one of the city’s several dozen retail cannabis stores. Once inside, customers may purchase up to one ounce of cannabis flower and 3.5 grams of cannabis concentrate, all of which is subject to a 10% retail excise tax. (Purchases by US medical patients are tax-exempt.)

Once purchased, cannabis may be legally transported in your car, but not across state lines, and it can’t be lit on fire. Smoking cannabis in a motor vehicle can result in a DUI charge, complete with jail time and a fine of up to $2000.

Tourists can buy cannabis everywhere but can smoke it almost nowhere.

So where can you smoke it? Unfortunately, Vegas doesn’t provide many options for tourists, who can buy cannabis everywhere but can smoke it almost nowhere.

At present in Las Vegas, it is only legal to imbibe cannabis in a private residence with the shades drawn. (Public consumption is banned, including consumption “exposed to public view.”) So, Vegas visitors lucky enough to know home-owning, cannabis-friendly vampires are in luck.

The rest of us are on our own. A good percentage of hotels forbid smoking of any sort, while casinos, which abide by federal guidelines, forbid even possession of the federally prohibited substance. The handful of Vegas cannabis stores that make deliveries all make the same stipulation: No deliveries to casinos.

Here’s a fun way to remember where you can and cannot ingest cannabis in Las Vegas: Wherever alcoholic beverages are allowed—which in Vegas means the airport, casinos, plazas, and out on the streets and sidewalks—cannabis consumption is forbidden.

What’s more, public consumption of cannabis in Las Vegas could result in a $600 ticket. Thankfully, it appears the city’s police aren’t aggressively hunting offenders. As attorney Carlos Blumberg told Leafly in September, his law firm has seen no rise in the ticketing of tourists since adult-use legalization began on July 1.

But none of this helps tourists in possession of legal cannabis but lacking places to legally imbibe. If it’s any consolation, Las Vegas County Commission Chairman Steve Sisolak feels our pain. “I’m very sympathetic to these people because they have no place to go to,” Sisolak told Leafly in September. “They’re purchasing product they can’t use anywhere and we’ve got to address this situation.”

For now, there are a handful of cannabis-friendly AirBNBs not far off the Strip, and the promise of adults-only cannabis lounges in the future. (Legislation to establish such venues failed this spring but will be revisited in 2019.)

1. Forgive the home-team plug, but for god’s sake use the Leafly app, which will tell you the location of the nearest dispensary down to a tenth of a mile. If you’re required to travel more than an eighth of a mile, drive or be driven. Vegas is infamous for its deceptive distances, and many attempted strolls to visibly nearby landmarks have turned into death marches of sweaty friends hallucinating their way toward an ever-receding mirage. I blame the heat, and the humongous scale of the place. As Drake will croon in a 2019 chart-topper, “Vegas is the place for Lyft.”

2. Vegas’s retail cannabis scene is a mere 18 months old—essentially a still-morphing newborn—and the differences between the retail outlets should be celebrated. Among my most highly recommended offerings: Reef Dispensaries, perched at the tip of an industrial-block-filling warehouse grow-op (and a mere block and a half from the Erotic Heritage Museum!); Las Vegas ReLeaf, tucked in a Strip-adjacent shopping center across the street from the world’s largest gift shop; Sahara Wellness (beautifully appointed and open 7 am-1 am daily!); Oasis Cannabis (also beautifully appointed and opens 24 HOURS A DAY); the casual Blum (whose waiting room boasts a half-dozen mirror balls); and Essence, which recently opened an elegant outlet in the 15-miles-south-of-Vegas desert oasis of Henderson.

3. This isn’t directly related to being high, but is instead a general quality-of-life directive: Unless you are someone who really loves casinos, consider staying at a non-casino hotel. Casinos are crowd-packed carnivals of excitement—which may not be what you want at the bottom of the elevator first thing in the morning.

4. Medical patients: Know that you will be well taken care of in Vegas, which maintains a firm distinction between recreational and medical cannabis. Dispensaries offer menus of high-dose medical products to patients that are off-limits to recreational users. (Maureen Dowd would no longer be capable of buying the medically-dosed candy bar that sent her beyond and back.) Just be sure to bring your home-state medical card and/or documentation.

5. Leave what remains behind. Only criminal dunces attempt to smuggle their purchased Vegas pleasures home with them. Yes, throwing away cannabis may seem to invalidate everything you ever knew about yourself, but the alternative is a possible high-drama bust that will at least ruin your trip and at most complicate the rest of your life. Be smart, and leave any and all surplus Vegas cannabis behind. To quote the beloved psalm, “What happens in Vegas, stays in Vegas.” 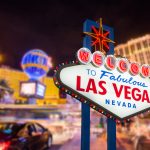 5 Ways To Get High In Las Vegas