In an effort to help people reduce or clear their criminal records, the Drug Policy Alliance is hosting a series of four free record expungement fairs in the Greater Los Angeles area. These events are a sponsored project of MedMen Enterprises.

California’s marijuana legalization law allows people to retroactively reduce or clear marijuana convictions for activity that is now legal or less severely punished since Proposition 64 passed in 2016. The expungement fairs will provide free access to attorneys and paralegals from partnering organizations to help those who have been impacted and are part of a broad array of services being offered, including employment, health care, immigration consultation, and voter registration.

The first fair in this new series will be Saturday, March 17th, at Los Angeles Trade–Technical College near Downtown Los Angeles.

“Doing this work is about protecting people from the consequences of our outdated, failed drug laws,” said Eunisses Hernandez, a California policy coordinator for the Drug Policy Alliance. “Prior marijuana convictions can create barriers to housing, employment, and even make people a target for deportation, principally impacting poor communities and communities of color. California’s historic marijuana legalization initiative has already helped thousands clear or reduce a marijuana conviction from their record, but we need to get the word out to the hundreds of thousands of other Californians who could benefit from this groundbreaking provision.”

Adam Bierman, CEO of MedMen – a Los Angeles-based cannabis company with facilities and operations in three states – commented, “It’s a responsibility we have as leaders of the new, legal industry, to help reverse the devastation caused by selective enforcement experienced during the failed war on drugs. This is a new lease on life for these individuals which in turn begins a process to re-strengthen families and communities.”

In the state of California, there are 4,800 barriers to housing, employment, and citizenship that exist for someone with a criminal record. Reducing or expunging prior convictions, including prior marijuana convictions, removes thousands of barriers that allow people to fully reenter their community and society. It’s not easy to take care of reducing or expunging your record without legal help, so these free fairs are crucial for helping reach more people who need assistance.

The retroactive penalty reduction provisions of Prop. 64 were a priority for the Drug Policy Alliance when the initiative was being drafted. DPA and its partners have hosted dozens of expungement fairs like this and have already helped hundreds of people get their records changed. These fairs have generated extensive media coverage across the state of California – and even nationally in the Los Angeles Times and Washington Post – and have helped this issue gain momentum on a systemic level. Earlier this year, San Francisco’s district attorney announced that the city will clear or reduce thousands of marijuana convictions dating back decades. Seattle then made a similar announcement the following week, and last week the Sonoma County district attorney’s office said it will begin clearing or reducing nearly 3,000 marijuana-related convictions. 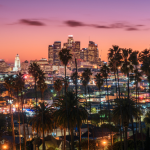