Though building a working relationship with banks is a long-term positive, previous capital raises could come back to haunt marijuana stocks for the next couple of years.

2018 is likely to go down in the record books as a transformational year for the legal cannabis industry. Despite more than two dozen countries around the world legalizing medical cannabis over the past two decades, it’s the legalization of adult-use cannabis in Canada that’s become the biggest victory for weed enthusiasts (and investors) in history.

With Canada’s Parliament agreeing on a variety of amendments to the original Cannabis Act, bill C-45 (as it’s officially known) moved on to royal assent. Shortly thereafter, Prime Minister Justin Trudeau announced that the official legalization date will be Oct. 17, 2018. When the proverbial green flag waves, cannabis growers, processors, distributors, retailers, and ancillary pot companies will be vying for what could be a piece of $5 billion in added annual sales.

Financing has been a major headache for marijuana stocks

To be clear, getting to this point hasn’t been easy for Canadian marijuana stocks. Canada approved medical cannabis in 2001 and parliament has had a considerably more favorable view of weed relative to the U.S. federal government. Even so, pot-based businesses in Canada have received the short end of the stick.

Arguably the biggest issue for Canadian marijuana stocks (and U.S. pot stocks, too) has been the lack of access to basic banking services. Because recreational weed has been illegal in Canada, financial institutions feared the potential for criminal and/or monetary penalties if they offered banking services — such as a checking account, a line of credit, or a loan — to marijuana-based businesses. This has left most pot stocks to get creative when it came to raising capital because no cannabis company is earning anywhere near enough in positive operating cash flow from medical weed sales and exports to fund broad-based capacity-expansion projects.

Over the past two years, investors in Canadian marijuana stocks have become all-too-accustomed to the announcement of bought-deal offerings. A bought-deal offering involves the sale of common stock, convertible debentures, stock options, and/or warrants in an effort to raise capital.

While these offerings have been largely successful in raising money that growers have used to expand their capacity, broaden their product lines, and/or make acquisitions, they’ve also ballooned the outstanding share counts of cannabis stocks, thereby diluting existing investors. Worse yet, these pot stocks that have used options, warrants, and/or convertible debentures could see this dilutive impact drag on through 2021 or 2022, in some cases.

Times are changing, and a new relationship is about to blossom

However, the passage of the Cannabis Act means a new door is opening for the legal weed industry in Canada — namely, banks are now free to offer banking services to cannabis companies without any fear of criminal or financial penalties. While this doesn’t mean that pot stocks won’t turn to bought-deal offerings to raise capital, it’s no longer their only means to do so.

Case in point: Earlier this week, Aurora Cannabis (NASDAQOTH:ACBFF) announced that it had agreed to a 200 million Canadian dollar ($150.3 million U.S.) debt facility with the Bank of Montreal (NYSE:BMO) that could be upsized to CA$250 million ($187.9 million) in the future. The current facility from Bank of Montreal will consist of a CA$50 million revolving credit line, as well as a CA$150 million term loan.

The extra CA$50 million, should Bank of Montreal agree to upsize the facility, would predominantly consistent of a term loan along with other credit instruments making up the smaller remainder. According to the press release, the term loans are expected to carry an interest rate in the mid-to-high 4% range per year.

Having successfully met all of BMO’s stringent risk assessment and other due diligence criteria to establish this facility reflects well on the maturity, progress and prospects of Aurora, as well as the quality and economic value of our production facilities. This is by far the largest traditional debt facility in the cannabis industry to date. The funds provide us additional fuel to complement our end-to-end portfolio of vertically integrated, geographically and horizontally diversified assets, aimed at building a pre-eminent global cannabis company with a superior margin profile.

Interestingly enough, though, this wasn’t Bank of Montreal’s first foray into the legal cannabis industry. Back in January, Bank of Montreal, along with GMP Securities, led a bought-deal offering for Canopy Growth Corporation that would see more than 5 million shares of common stock, valued at roughly CA$175 million at the time, be sold. Call it a prescient move or a cunning business decision, but Bank of Montreal looks to be a frontrunner among Canada’s major banks to lead financing activities for the legal cannabis industry.

On one hand, the entrance of major banks into the legal cannabis space should be marked with a round of applause from investors. For these companies, finally having access to the same basic financial services as traditional businesses is a big step in the right direction. It should ease any sort of near- and intermediate-term capital concerns for most pot stocks, as well as provide a means for continued consolidation in the marijuana industry, which is where the trend has been heading in recent months.

But don’t think for a moment that gaining access to basic banking services makes the negatives associated with previous bought-deal offerings disappear with the flip of a switch.

As noted, most growers have stock options, warrants, and/or convertible debentures on their books that could vastly increase their outstanding share counts over the next couple of years. Yes, these instruments have been vital in generating capital for pot stocks, but they’re going to make life unpleasant for investors. Not only does an increase in the outstanding share count dilute the value of existing shares, but it makes it more difficult for publicly traded marijuana stocks to turn a meaningful per-share profit since net income is divided by a growing number of outstanding shares.

In other words, legalization is great news over the long run, but even new banking relationships won’t fix the damage done by bought-deal offerings for a majority of marijuana stocks in the near and intermediate term. 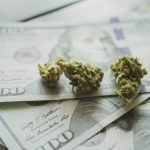