Marijuana Madness: This Is How CBD Oil Can Cause A Failed Drug Test

Cannabidiol, otherwise referred to as CBD is considered by a growing number of Americans to be the best thing since sliced bread. Not only does this non-intoxicating component of the cannabis plant provide people with relief from conditions ranging from anxiety to chronic pain, but it’s also mostly overlooked by law enforcement, in spite of its outlaw status in the eyes of the federal government.

But people are being told that they can consume CBD on a daily basis and never have to worry about failing a drug test. Unfortunately, this claim isn’t entirely valid. It turns out there is still a minute risk of failing a drug test when using CBD products. Sadly, it is impossible to know whether an individual is susceptible to this result until it is too late. There are many variables to consider.

Earlier this month, a woman from Atlanta, Georgia claims she lost a job opportunity because a pre-employment drug screen discovered THC metabolites coursing through her veins. But how could this be? She didn’t have a history of marijuana use. The only thing even remotely close to marijuana she consumed before the test was the CBD oil her doctor recommended as a way for her to combat anxiety and pain.

A report from WSB-TV 2 indicates that the woman, who has asked to remain anonymous, used CBD oil for two weeks before she was invited to submit a drug test for a new job. She thought she had nothing to worry about, up until human resources called to tell her she had been disqualified from the applicant pool due to a failed result.

“They expressed that I have a positive THC test,” the woman said. “I have never consumed marijuana in my life.”

Although the CBD compound itself will not lead to a failed drug test, Anthony Laborde of Discount Nutrition, which sells a variety of hemp-based CBD products, including the brand the woman reportedly used, says “it is one thing we warn our customers about, there’s a possibility.”

Because CBD products do contain a trace amount of THC (no more than 0.3 percent), he said, “there is always a possibility you could fail” a drug screen.

It is due to the inconsistencies associated with the manufacturing of CBD products that makes it impossible for the consumer to know what they are getting their hands on. Since none of the CBD products sold over the counter have been approved by the U.S Food and Drug Administration (FDA), it is relatively easy for pseudo cannabis companies to skimp on testing and other important quality controls.

In some cases, these products are not CBD at all.

Over the summer, the Centers for Disease Control and Prevention published a report showing that phony CBD merchandise was responsible for poisoning more than 50 people in Utah. A laboratory test showed they were not CBD, but rather “synthetic marijuana, often referred to as Spice and K2. Other reports from around the country surfaced later showing this was not an isolated incident.

“Having no idea of what’s in the product is absolutely unacceptable,” the woman said.

It is not common for CBD users to turn out a positive drug test for THC. Yet, sometimes when patients are consuming in upwards of 1,000 milligrams per day, it can trigger a false positive. The average CBD user typically only consumes between 120 to 160 milligrams daily. Still, Consumerlab president Tod Cooperman, whose company tests natural supplements like hemp-based CBD, says around 10 percent of those people who use CBD can test positive for THC. So, “it can happen, he said.

“It also depends on not just the product, but some people metabolize CBD differently,” he added.

When it comes to CBD it is always best to purchase these products from a reputable dealer. Due to their popularity, CBD products can now be found in convivence stores and trucks stops all over the country. While we are not saying that these products cannot be trusted, it is likely a better move to procure them from anywhere other than a 7-Eleven. Just saying. This may not better your chances of passing a drug test, but it could prevent any number of undesirable occurrences.

Be careful out there folks!

Mike Adams is a contributing writer for Forbes, Cannabis Now and BroBible. His work has also appeared in High Times. 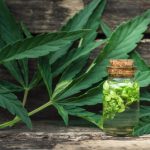 Marijuana Madness: This Is How CBD Oil Can Cause A Failed Drug Test