Attention Marijuana Users And Employees: How To Cross The U.S. Border

Not long ago, the United States Customs and Border Protection (USCBP) updated its position on employees of the Canadian marijuana industry crossing the border into the U.S.  Canadian citizens that are connected with the industry are allowed to enter the U.S. for non-marijuana related purposes. The statement reads:

According to Diane Butler, an immigration lawyer located in Seattle, this advisory does not provide enough certainty to those working in the Canadian cannabis industry when crossing the border. She added, “using ‘reason related to the marijuana industry’ (as the standard) for inadmissibility still is an overly broad approach, and CBP still may have Canadians admit to the essential elements of illegal cannabis use before October 17th and be rendered inadmissible.”

Since the ‘reason related to the marijuana industry’ standard is indeed very broad, it is hard to know exactly what to expect at the border. More clarification may come with time. As for those Canadians who may innocently admit to marijuana use in the past, they can expect to be denied entry as they were in the past. The USCBP policy makes it clear:

Generally, any arriving alien who is determined to be a drug abuser or addict, or who is convicted of, admits having committed, or admits committing, acts which constitute the essential elements of a violation of (or an attempt or conspiracy to violate) any law or regulation of a State, the United States, or a foreign country relating to a controlled substance, is inadmissible to the United States.”

This is because the use or possession of marijuana is illegal under U.S. federal law and admitting to smoking marijuana in the past is therefore the equivalent of admitting to violating the federal law. If the citizen is barred from entry to the United States, then if they wish to travel to the U.S. in the future, they will be need to apply for a waiver, which isn’t particularly easy to obtain.

The best advice for anyone in any way related to the Canadian cannabis industry under these circumstances is to avoid mentioning marijuana in any way while entering the United States. However if they are related to the industry in some way and are pressed on their connection to it, they should make it clear that they are entering the U.S. for non-marijuana related purposes only.

As for those people who currently have a conviction for possession of marijuana in the past, the new rules recently announced by the Canadian federal government now allow for a pardon which can be applied for without a fee and without delay. Such a pardon would erase the conviction from the person’s criminal record and restore that person’s legal status as being without convictions throughout Canada.

Unfortunately, however, the Canadian criminal data base has been previously shared with the Americans, so that U.S. Customs and Border Protection personnel will still have a record of the offence, despite its removal by Canada from the criminal data base there. It would be a big mistake to assume that a Canadian pardon will wipe a criminal record clean at the U.S. border and it therefore would be OK to say you do not have a criminal record. That could lead to a five year bar to U.S. entry for misrepresentation.

In other words, someone with a Canadian criminal conviction for possession of marijuana in the past will still be subject to exclusion from entry into the United States because the Canadian conviction will amount to a breach of the U.S. rules related to drug offences. That being the case, a person with a past Canadian conviction for possession of marijuana will still need to apply for a waiver should that person want to travel to the United States.

Obtaining a U.S. waiver for a criminal offence, such as possession of marijuana, is a time-consuming effort that entails paying a filing fee, going to a port of entry to get finger printed, getting references from friends or relatives and obtaining a police record from RCMP headquarters in Ottawa. The biggest challenge is filing the application, which sometimes requires getting up early in the morning and standing in long lines at airports to take your turn submitting the paperwork. In Toronto, for example, despite the demand, only Saturday is scheduled for these submissions, so the lineup for submitting paperwork on these mornings at Pearson airport starts very early and takes most of the day. Unfortunately, this remains the requirement for those with a past history related to marijuana. 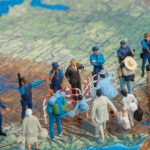 Attention Marijuana Users And Employees: How To Cross The U.S. Border