Sessions Says He has “Serious Concerns” About Legal Marijuana….What’s Next?

With thousands of jobs and billions of dollars at stake, it’s a burning question: Is Atty. Gen. Jeff Sessions preparing to mess with voter-approved sales of recreational marijuana?

It’s a question of prime importance in six Western and two New England states that have legalized marijuana use despite a federal law of the land classifying weed as a controlled, dangerous drug. And it appears Colorado, Washington, Oregon, California, Nevada, Alaska, Maine and Massachusetts are likely to get a lot of company.

Fourteen additional states are planning similar recreational-sale initiatives, possibly this year. The rush to legalize marijuana has been driven by the potential tax and economic boosts of an industry already generating an estimated $6 billion in annual sales. Twenty-nine states also have decriminalized or legalized medical marijuana.

Last year, while still a Republican senator from Alabama, Sessions made his opposition clear: He called weed dangerous and “not something to laugh about.” The government needs “to send that message with clarity — that good people don’t smoke marijuana.”

This year, as President Trump’s new attorney general, Sessions said marijuana’s effect “is only slightly less awful” than heroin’s. (Nearly 13,000 people died from heroin overdoses in 2015, according to the Centers for Disease Control and Prevention, while no one has ever been recorded as fatally overdosing on marijuana, the Drug Enforcement Administration says.)

So what does Sessions intend to do now?

He warned four governors in letters released last week that he had “serious concerns” about the effects of legalization and suggested the states’ drug detente with the Justice Department was at risk.

The letters were sent to Govs. Jay Inslee of Washington, John Hickenlooper of Colorado, Kate Brown of Oregon (all Democrats) and Bill Walker of Alaska (a left-leaning Independent).

In the similar-sounding letters, Sessions didn’t outright tip his hand regarding a possible federal crackdown, leaving government and industry officials to read the letters as tea leaves and interpret them differently. Some supporters of legalized weed are worried, some encouraged — just slightly.

Citing a series of recent federal and state investigations into the impact of pot legalization, Sessions listed repeated breakdowns in security, distribution and the controlled use of marijuana in all four states.

For example, a 2017 state police impact report on Oregon’s market, Sessions wrote, found that as much as two-thirds of marijuana production occurred in the black market; marijuana-related emergency room visits had soared by 55%; law enforcement was unable to keep pace with out-of-state cannabis diversion — pot grown legally in Oregon then shipped out of state.

Gov. Brown’s Salem office did not respond to a request for comment, nor did the Juneau office of Gov. Walker.

Sessions asked both Inslee and Hickenlooper — using the same language in separate letters — to prove that “all marijuana activity is compliant with state marijuana laws,” and told them the impact reports raise “serious questions about the efficacy of marijuana ‘regulatory structures’ in your state.”

The attorney general was, in part, responding to a letter sent to him in April co-signed by the four governors urging the administration to continue the Obama administration approach to state marijuana sales — regulate but don’t raid. The governors’ letter also asked “the Trump administration to engage with us before embarking on any changes to regulatory and enforcement systems.”

Inslee, who is worried about getting into a drug battle with the other Washington, reacted coolly to Sessions’ letter, saying it relied on “incomplete and unreliable data that does not provide the most accurate snapshot of our efforts since the marketplace opened in 2014.”

Washington state Atty. Gen. Bob Ferguson said he was disappointed by Sessions’ letter, and “also disappointed that [Sessions] has yet to accept my repeated invitations to meet in person to discuss this critical issue face to face.”

Colorado’s Hickenlooper, however, did meet recently with Sessions and told reporters he didn’t think a crackdown was in the works, partly because Sessions has too many other government balls to juggle.

Patrick Rosenstiel, spokesman for the New Federalism Fund — a collection of cannabis firms opposed to federal intervention of the state systems — saw an upside to Sessions’ letters. The letters suggest a willingness to work with the states, he said in a statement to The Times, “but there is still a need for congressional action to provide clarity for officials at the local, state and federal levels.”

Sessions had formed an anti-crime task force this year to study the legal marijuana issue. Last week, citing documents obtained from the task force, the Associated Press reported the study group is recommending the U.S. maintain sales oversight but keep its distance.

Critics speculated that was bad news for Sessions, since it would effectively continue the policy instituted under President Obama, guided by standards written by former Deputy Atty. Gen. James M. Cole. The 2013 Cole Memo, as the provisions are referred to, lists rules the states should follow to avoid federal intervention.

They include preventing distribution of cannabis to minors; blocking gangs, cartels or criminal enterprises from worming into the state system; and preventing marijuana shipments to states that haven’t legalized such sales.

Sessions asked Inslee to outline steps his state is taking “to combat diversion of marijuana, to protect public health and safety, and to prevent marijuana use by minors.”

Washington weed has been sent to 43 other states, Sessions said, referring to a 2016 impact report’s finding on intercepted mail shipments. More than a dozen THC labs (which extract the compound that gives cannabis its euphoric effect) literally exploded in one year alone, Sessions noted, and marijuana-related calls to poison centers soared.

Inslee and Ferguson said, contrary to Sessions’ claim that 17 THC extraction labs exploded in Washington state in 2014, “no licensed extraction business has exploded” in three years of sales. “The incidents referred to in Sessions’ letter were black- or gray-market facilities, often using butane in an enclosed space rather than a lab.”

In his letter to Hickenlooper, Sessions said interdicted shipments of Colorado weed were headed for 34 other states, and he noted that marijuana-related traffic accidents and deaths were on the rise in Colorado.

“Although youth marijuana use declined at the national level for the time period after Colorado enacted ‘recreational marijuana’ laws, youth use in Colorado ‘increased 20%,’” Sessions wrote, quoting from an impact report done in conjunction with the Office of National Drug Control Policy. 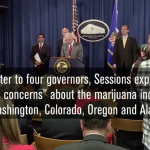 Sessions Says He has “Serious Concerns” About Legal Marijuana….What’s Next?