Thanksgiving is coming up, and if you are like me, you are planning a Thanksgiving meal with the family, and a Danksgiving meal with friends. I will never forget when my friend Josh first introduced me to the concept of Danksgiving about 15 years ago. Today cannabis edibles are everywhere, but back then they were much less common. Danksgiving celebrations back then usually consisted of just a tray or two of brownies or cookies, and a bunch of us puffing down and playing video games.

These days Danksgiving has become a national phenomenon, with people making really elaborate multi-course meals. I am in the process of rounding up recipes for this year, and figured I would pass along the recipes I am going to try to make. If you have a recipe that you are making, feel free to put it in the comments section so that others can benefit from your knowledge. For the recipes below, I am using cannabis butter, which can be made in a variety of ways. Pick they method that is best for your situation.

The turkey is obviously the focal point of the meal, unless of course you are a vegetarian or vegan, at which point I apologize in advance for this part of the article. Making a cannabis infused turkey is actually easier than one might think, provided that they are already familiar with how to make a Thanksgiving turkey. Below is the recipe I am using, which basically uses as a rub on the outside of the turkey, and in the marinade that is injected into the turkey. It also incorporates some cannabis flower:

1. Combine marinade ingredients and heat in a saucepan on low for 15 minutes, then remove from heat and let it cool.

2. Rub the turkey with cannabutter, salt, and pepper.

3. Inject the marinade throughout the turkey in equal amounts.

5. Pour two cups of broth or water into the roasting pan, place the turkey in the oven and turn down the heat to 350°F.

6. The rule of thumb for cooking a turkey is 13 minutes per pound. Our 12 lb turkey took about 3 hours to cook. It’s done when the temperature measures 180°F in the thigh and 165°F in the breast.

7. Every 45 minutes, remove the turkey from the oven and baste with the rest of the marinade.

8. Rest the turkey for 15 minutes before carving.

You can’t have a Thanksgiving turkey without the stuffing, at least in my opinion. Below is a recipe for stuffing, which also requires a cannabis oil, a recipe of which can be found below:

1. Add ground cannabis and olive oil to saucepan and cook on low to medium heat for 3 hours.

2. Pour the oil into a glass container, using a cheesecloth to strain out all ground cannabis from the olive oil mixture. Repeat this step as necessary to strain all of the oil from the ground cannabis , and discard the remaining cannabis.

2. Add onions and garlic to the cannabis olive oil and cook until soft, then add the celery, pear, dried fruits, nuts, herbs, and cubed bread stuffing.

3. Add the chicken stock and stir until mixture is fully combined.

4. Transfer to a greased 8″x8″ or similar baking dish and bake for 40 minutes.

Cannabis mashed potatoes are extremely easy to make. It’s basically just regular mashed potatoes, but with cannabutter instead of regular butter. I use the following recipe (stolen from my grandma!), but as with regular mashed potatoes, you can always zest it up with additional ingredients, or use a little more butter to make it creamier. If you really want your potatoes to pack a punch, you can substitute cannabis milk for regular milk, a recipe of which can be found in the green been casserole section lower in this article:

2. Bring a gallon of water and 2 tablespoons salt to a boil over high heat.

3. Add potatoes to boiling water and boil about 15 to 20 minutes (until you can stab them with a knife and the potato falls off, but doesn’t lose its form).

4. In a saucepan heat cannabutter and milk together until cannabutter melts and mixture steams.

5. Drain the potatoes well and return them to the pot.

7. Lightly mix in about half of the cannabutter/milk mixture, until blended.

Some people love green bean casserole, some people absolutely hate it. If you are like me, you used to hate it as a kid, but now as an adult consider it to be a Thanksgiving Day staple. Below is the recipe I am using, which incorporates cannamilk and infused bacon fat (yes, cannabis infused bacon fat, it’s a thing), the recipes of which can be found below:

1. Heat 2 cups of milk (plus a tablespoon extra) in a saucepan on low to medium. Do not let the milk come to a boil.

2. Add ground cannabis to the hot milk and simmer for 1-2 hours, stirring occasionally. Never let the mixture come to a boil.

3. Pour the hot cannamilk into a glass container, using a cheesecloth to strain out all ground cannabis from the milk. Repeat this step as necessary to strain all of the milk from the ground cannabis, and discard the remaining cannabis.

4. Cover the container with a lid and place in the refrigerator to allow the cannamilk to cool.

Note: you will only use 1 cup of cannamilk in the Green Bean Casserole. The other cup can be used to make mashed potatoes, or another dish of your choosing.

1. Add the slabs of bacon to a skillet and cook over medium heat until crispy.

2. Remove the bacon and keep the grease in the pan.

3. Add ground cannabis to the pan and simmer on low heat for at least 20 minutes. The longer you simmer, the more potent the extraction will be.

4. Pour the hot grease into a glass container, using a cheesecloth to strain out all ground cannabis from the bacon fat mixture. Repeat this step as necessary to strain all of the fat from the ground cannabis, and discard the remaining cannabis.

3 slices of thick-cut bacon, chopped (you can use some of the bacon that you used to make the cannabis bacon fat extraction)

2. Add the onions and mushrooms to the bacon-cannabis grease in a skillet and cook until soft. Be sure to cook on low heat, so as not to destroy the THC.

3. Add garlic and cook for another 5 minutes.

4. Transfer the mixture to a bowl. Set aside.

5. Melt the cannabutter in the pan and whisk in the flour to make a roux.

6. Whisk constantly for another 2 minutes while gradually stirring in the cannamilk, then slowly whisk in the half-and-half. Add the cheese and whisk until melted.

7. Transfer the onion, mushroom, bacon and garlic mixture back to the skillet with the sauce. Stir everything together and let the sauce simmer for a few more minutes. Add salt and pepper to taste.

8. Remove pan from the heat and stir in the green beans.

9. Transfer the green bean mixture to a greased 8″x8″ or similar casserole dish and sprinkle with fried onions.

10. Bake uncovered for 20 minutes, or until the sauce is bubbling around the edges.

4 tablespoons of melted cannabutter, plus a little bit for buttering the baking dish

3. Whisk together the filling ingredients in a large bowl, then transfer the mixture to the buttered baking dish.

4. Combine the flour, brown sugar, cannabutter and salt from the topping ingredient list in a medium bowl until moist and the mixture clumps together, then stir in the pecans.

5. Spread the topping mixture over the top of the filling mixture in an even layer.

1/2 cup of each cheese – gruyere, smoked cheddar, and smoked gouda

Pinch of salt and pepper

1. Heavily salt a large pot of water and bring to a boil. Add pasta and cook for about 7 minutes, or until slightly less than al dente. Drain in a colander and let cool.

3. Grate or chop the gruyere, smoked cheddar, and smoked gouda cheeses into cubes and set aside.

4. Add the cannabutter to a large pot and melt over low to medium heat. Add the onion and garlic and saute for 3-5 minutes.

5. Add the flour to the cannabutter, onion, and garlic mixture and stir constantly over low to medium heat for 2 minutes, or until the mixture starts to turn a slightly darker color.

6. Whisk in the cream, then add the gruyere, smoked cheddar, and smoked gouda, stirring constantly until the cheese is melted.

7. Add the cream cheese, paprika, salt, and pepper. Stir for 2-3 minutes or until the sauce appears silky and smooth.

8. Add the cooked macaroni and stir to combine thoroughly.

9. Transfer to a deep casserole dish (8″x8″ or similar) and bake for 15-20 minutes, or until the edges are bubbly and the top is golden brown. 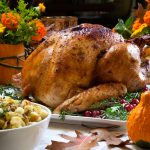