How To Have An Amazing Cannabis Weekend In Seattle

Seattle is one of the legal cannabis world’s two founding capitals, but it hasn’t really gotten a lot of love as a tourist destination.

To be fair, the city is probably known more for grunge music, rain and Microsoft than scenic mountains and ski resorts, like our counterparts in Denver.

Please don’t tell my fellow Seattleites I told you this—there is nowhere in the world more beautiful in the summertime. If you plan on observing National Vacation Planning Day January 30 late, consider penciling in a Summer trip to Seattle. Whether you’re sipping rosé on one of the city’s many sun-soaked patios or traversing wildflower-filled meadows in the Cascades, it’s an ideal destination for a cannabis-centric weekend getaway. Hempfest, Seattle’s long-running legalization “protestival,” also happens to fall on the weekend of August 18-20, which is a similarly great reason to take a weedy weekend away in the Emerald City. Everyone gets into the Hempfest spirit here, even the cops, who famously handed out bags of Doritos printed with an overview of local cannabis laws to attendees one year. While Hempfest is definitely a sight to behold, the city also boasts a number of other cultural, culinary, and cannabis-based attractions.

. . . Or don’t come in Summer. Our weather is inherently unpredictable, and summer is no sure thing, either. You can visit Seattle year-round as long as you come prepared for what the weather throws at you. And you’ll save a bundle visiting in the Winter.

So, brush up on your Washington cannabis law and prepare yourself for three terrifically elevated days in Seattle.

This might sound strange, but don’t spend your first day in Seattle in Seattle. A quick detour to nearby Vashon Island is well-worth renting a car for, and Friday just so happens to be an excellent day to do it. Every Friday is #WingFriday at Gravy Vashon, chef Dre Neel’s wonderful contribution to the island’s already vibrant dining scene, and the first Friday of the month is the One Night in Bangkok dance party at the adjacent May Kitchen + Bar, an equally delicious Thai joint that turns itself into the island’s only nightclub on Fridays.

On the way to the island, stop over at Origins Cannabis, conveniently located on the route to the Fauntleroy ferry dock in West Seattle, and grab some of Mirth Provisions’ Legal Sodas, which come in adorable, old-school stubby bottles and flavors like rainier cherry, pomegranate, and lemon ginger. Each flavor is based on a different strain profile, and comes in a variety of dosages. They’ve got a great selection of stuff from Avitas Agriculture as well, whose concentrates come highly recommended. If they have any in stock, their slim, brushed aluminum prefilled vapes are a great way to consume discreetly.

Before you head in to Gravy, make sure to drive out to the Point Robinson Lighthouse, which provides a very scenic view of the mainland across Puget Sound, and a perfect place to enjoy your sodas and a few sips off your vape pen before dinner. After you’ve sated yourself on Neel’s inventive wings and shaken your tailfeather a bit, retire to one of the ultra-modern guest suites at The Lodges, Vashon’s only traditional hotel. It’s right in town, so you can partake of as many of May’s lovely libations as you like, yet tucked back far enough from the main road that you still feel like you’re staying in a secluded forest.

Start your day at Snapdragon, which has a vast case of mind-meltingly good pastries, and an excellent full breakfast menu to boot. Grab a benedict for there, maybe a scone for the ferry, and get thee back to the mainland. First stop, your new digs: Inn at the Market, ideally in one of its west-facing rooms, which feature stunning views of Elliott Bay. As the name suggests, this hotel is in Pike Place Market, one of the country’s oldest continuously operating public farmers’ markets and one of this city’s true treasures.

You could snack your way through Pike Place and never stop, but the following treats are not to be missed: the spicy landjaeger from Bavarian Meats, “OMG” peaches or Taylor Gold pears from any of the many fruit stands, and Daily Dozen’s delightful mini donuts. Because shopping is ever so exhausting, you should probably also reward yourself for all your hard work with some ice cold beer and oysters. Pike Place just so happens to have a couple excellent places to do this. The Athenian’s happy hour oysters are a steal at $1.50 a pop, and their beer is served in the frostiest mugs you’ve ever seen. Pike Brewing Co.’s brand new upscale brasserie, Tankard and Tun, is also well worth splurging on.

By this time, you probably need more herb, and Have a Heart’s Belltown location is just a hop, skip, and a jump away. Go grab some of The Goodship Company’s discrete and delicious tart cherry pastilles, marvel at HaH’s lovely murals and massive glass sculpture of a burning joint, then make your way over to Seattle Art Museum. Nibble a few pastilles on your way, as you’ll definitely want to arrive “pre-boarded” on the Goodship for Spencer Finch’s eye-warping, glass and light exhibit, The Western Mystery. After spending a few hours contemplating the beauty of Finch’s re-creations of sunsets over Puget Sound, it’s time for some sushi. Your hotel happens to also be home to Seattle’s best sushi restaurant, Sushi Kashiba, and the omakase is truly an experience. If you’re really famished, the chicken karaage is one of the best deep-fried things you’ll ever eat.

Start your day off right at Cycene, which boasts some of Seattle’s finest shrimp ’n’ grits and is less than half a block from your hotel. Then, get out of downtown and go see Fremont, Seattle’s weirdest neighborhood and the self-proclaimed center of the universe. You could spend several lifetimes exploring the vintage treasures in the Fremont Vintage Mall, but try not to lose yourself there or you’ll miss out on the neighborhood’s many other gems.

One of those is Hashtag, a small but excellent pot shop on south Stone Way, the neighborhood’s second hub. Get one of artisan producer Raven Grass’ mood-lifting Silver Tip pre-rolls, head down to Fremont Brewing Co. for a six-pack of their insanely bright Lush IPA, and go enjoy both at nearby Gas Works Park, a former gasification plant that is now a broad, grassy park with another ridiculously scenic view. Depending on how spry you’re feeling, climbing around on the old equipment in the park’s open air barn area can be a very return-to-childhood, abandon-yourself-to-wanton-bliss kind of moment. Probably everyone could use more of those.

After that adventure, make a final stop at the Fremont Troll, who lurks under Highway 99 clutching a Volkswagen Beetle in his massive concrete hand. You might think a trip up to the top of the Space Needle is the truest Seattle experience, but it’s a lot more fun to look at than to visit. The troll is free, you don’t have to wait in line to pay him a visit, and he’s every bit as iconic. Besides, if you haven’t taken a goofy picture while posing in front of his voluminous beard, have you really even been to Seattle? 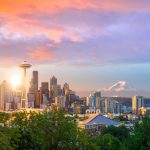 How To Have An Amazing Cannabis Weekend In Seattle