Nevada Is Breaking Cannabis Sales Records, Including $30M In Taxes For The State

Nevada’s recreational marijuana market is blooming ahead of expectations. Retailers there sold close to $200M of cannabis between July and December of 2017. That’s significantly quicker growth than Washington state and Colorado, which sold $67M and $114M respectively in their first six months of legal adult use cannabis sales.

The state of Nevada has collected more than $30M in taxes from the market in its first six months.

Eli McVey of Marijuana Business Daily wrote that three main factors contributed to the successful market launch. Nevada allowed retailers to begin sales while final details were hammered out. That got things up and running quickly and the influx of new customers were able to be served. Experienced companies with existing brands moved into the state quickly. This didn’t happen in Colorado or Washington because the market was less developed when those places legalized marijuana for recreational use. Nevada also has a large rotating new customer base because 40 million tourists visit Las Vegas each year.

Krista Whitley is CEO of the Nevada-based Altitude Products which works with cannabis companies on marketing and strategy, and offers its own subscription, “The Weekend Box” of cannabis products. “Overall people seem to be feeling really good about the roll-out,” she said. “The public support has been overwhelming and the positive media coverage of sales and tax revenue exceeding expectations certainly seems to help.”

The only negative responses to the new market come when there are robberies said Whitley. Of course, she said, “if banking was in place, dispensaries would be less of a public safety risk.” Currently, as a federally illegal substance, banks are generally staying away from the industry so large amounts of cash are secured with safes and armored trucks.

Some tourists are bothered by the increase of marijuana smoke smell on the strip, but most seem to be taking a “live and let live,” attitude.

There is one dispensary, Essence, on the Las Vegas Strip and a few just off the strip including Las Vegas ReLeaf, Sahara Wellness, and Reef. Whitney has noticed that female buyers “are focused on discrete consumption, using vape pens, edibles, and topicals, rather than traditional flower.” Some of the popular products she’s noticed are Dixie’s Awakening Mints, Rokin Vape Cartridges, Moxie concentrates, and Caviar Gold flower. All these products come from companies based outside the state, but are manufactured inside Nevada. 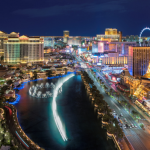 Nevada Is Breaking Cannabis Sales Records, Including $30M In Taxes For The State