ARVADA – Beer that will get you high? A new Colorado-based company says that’s exactly what they’re making.

Keith Villa, who was the creator and brewmaster of Blue Moon Brewing is launching CERIA beverages, a line of cannabis-infused non-alcoholic beverages containing THC.

CERIA claims this will be the first cannabis-infused drink to deliver a similar experience to drinking beer.

CERIA also said it is working with a cannabinoid research firm that has developed cannabis formulations that will be used in the new beverage. In a news release, it said ebbu’s pharmacology team spent the last few years studying how cannabis impacts users, and will create beverages tailored toward “chill, bliss or energy” highs.

CERIA said the beverages will be processed and infused by licensed marijuana processors, bottled on site and sold in licensed dispensaries. It will be sold in Colorado first, then in other states where marijuana is legal.

The company said the drinks will be offered in states where marijuana is legal by the end of 2018 in at least three strengths: light, regular and full bodied. It also said the beverages will have a variety of sensations.

Consumers will have to be 21 years or older to buy the drinks. 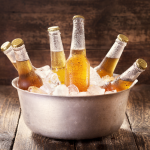